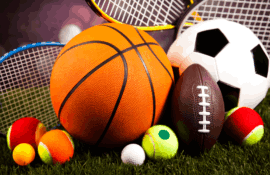 In the competitive world surrounding us, sports play a vital part in the overall development of the individual, varying from involvement of mental faculties and strategizing instincts to those requiring exertion of high degree of physical strength. The activities not only break the monotonous schedule but also help in the rejuvenation and entertainment of the individuals. The ambit of sports is not merely limited to being a de-stressing activity but have turned into an independent career option as well. Amongst the different means to promote and encourage sports, there lays a necessity to provide adequate support to the sportsperson.
Sponsorship plays an important role whereby a company, organization or individual provides an individual or organization with funds, products or services for commercial advantage.

Sponsorship is an arrangement that is mutually profitable both to the sportsperson and sponsor in the below stated manner:

One of the essential requisites of sportsperson towards his game to is maintain the integrity of the same. In the recent times, a number of episodes have been witnessed where the sportspersons have been involved in unprofessional behavior. Owing to the said conduct, the sponsors have ended their relationship with the sportsperson. Instances of such famous episodes in this regard are stated below:

Obligations of the Sportsperson

There vests an obligation on the sportsperson to maintain the dignity of his profession. Any misconduct on his part with respect to his game or behavior not only brings him a bad name but also hampers the market value of persons sponsoring him. The sponsors should therefore be alert and agile while drafting and executing the sponsorship agreement in order to safeguard their interests. The liabilities of the sportsperson in event of any breach of his obligations under the said agreement and subsequent termination of the same should be clearly specified. The penal obligations should also be cast in event of a failure of the sportsperson to be fair and loyal towards his game and any misbehavior in public.

For more information please write to us at :info@ssrana.com